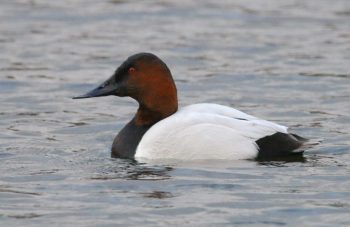 The end of 2018 brought a rather unusual visitor to our corner of Western Massachusetts—a belated Christmas present for the local birders in the form of a beautiful male Canvasback. The duck first appeared with little fanfare on an oxbow lake off the Connecticut River in Northampton and set to feeding, unaware of the excitement he was about to generate.

In the northeast at least, Canvasbacks are cold-weather birds. They make their first appearances in late fall—on rivers, lakes, and along the coast—and stay into early spring, following the vernal winds to their breeding grounds in the north and west. These large, attractive ducks show up with some regularity in our area, but they typically bypass my Hampshire County environs for Franklin, Berkshire, and Hampden Counties to the north, west, and south—within relatively easy reach (and I have made trips to see them), but not just around the corner. And though I’m happy to go birding anywhere, there’s something satisfying about seeing birds in your own county—a feeling akin to welcoming a friend into your home.

In the case of a Canvasback, the trick was finding one. Since 1970, there have been just over a dozen reports of these ducks within the county—not a common occurrence by any means. In my 16 years of birding within Hampshire County, I’d never managed to get time, place, and Canvasback to coincide. When I heard about this one, I felt I had my chance.

First, though, I had to call Mary. Mary McKitrick’s a newfound friend and frequent birding partner, and she’d be thrilled about our uncommon guest. When I reached her, she was already en route to Northampton, but she hadn’t heard about the Canvasback, so she took a side trip to find him.

No luck. In the half-hour between when I saw the initial report and when Mary made it to the oxbow, the bird had flown. But all was not yet lost. Just to north of the oxbow lies Paradise Pond, an aquatic haven on the Smith College campus that’s frequented by a variety of waterfowl (and connected to the oxbow by the Mill River). If the bird was anywhere, we thought, that’s where he’d be. Mary made a beeline for Paradise Pond.

And that’s where she found him.

Half an hour later, my family and I were there ourselves, watching the Canvasback at turns swimming, resting, and feeding among the pond’s resident waterfowl—Canada Geese, Common Mergansers, Mallards, and American Black Ducks. A small group of birders gathered while we were there, and we all shared in the spectacle of this wonderful bird, out of place yet carrying on as if nothing was out of the ordinary. We spent about an hour with him, enjoying both his company and that of the kindred spirits—friends all—who’d assembled on the shore to watch him. Of the myriad ways to close out the year, it’s hard to top a rare bird sighting in the company of family and friends. As we left, I silently thanked the bird and wished him Godspeed, not expecting to see him again but knowing full well that I’d try.

The next day—January first—I was back. For some time now, I’ve marked the turning of the calendar with an excursion among birds. Even if it’s just a walk in the neighborhood, I find it very soul-satisfying to see each new year in on feathered wings. Given the relative rarity of the Canvasback (and my love of ducks), a visit with him felt like a perfect way to open 2019. Of course, there was no guarantee he’d be there, but I thought it was pretty likely—the weather hadn’t changed and he was finding food. Absent some other external influence, there was no reason for him to leave.

I parked the car and started down the path overlooking Paradise Pond, glancing down at the water as I walked. As hoped, there among the usual suspects was the Canvasback. He’d drawn a small crowd of very happy birders and was leisurely swimming back and forth in front of them, looking like nothing so much as a model strutting down the catwalk. I reached the edge of the water in time for a couple of passes, and then he slowly drifted away from us, settling in with a large flock of Canada Geese. The scene was serene, the Canvasback captivating. We were enthralled. 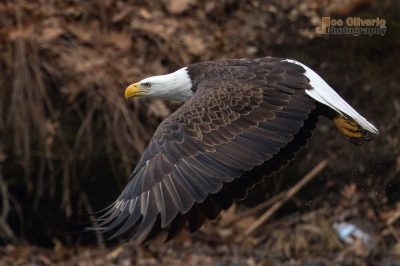 And then everything changed. With no warning, the Canvasback exploded into motion. From a slow swim he broke into a frantic, running takeoff, webbed feet smacking against the surface of the pond, sending loud thwacks! and plumes of water into the air. It took a moment for us to identify the cause of this sudden shift in demeanor: We’d been so focused on him that we didn’t see the Bald Eagle closing in from above.

He was airborne in no time, flying in a wide circle across our field of view, reaching full speed in seconds and racing away from his taloned assassin. The Eagle dropped in behind, huge and menacing, the duck just out of reach. The Canvasback’s timing had been impeccable: He’d known how long he’d need to get into the air and gain enough speed to outfly his pursuer; had he waited a fraction of a moment more, the Eagle would have taken him on the water. Advantage: Canvasback. The Eagle was too late.

Then we noticed the second Eagle, taking a line to cut off the fleeing duck. The first Eagle wasn’t looking for the kill, it was driving its prey into the talons of its partner—the hound to the hunter. It looked like it was all over.

But the duck picked up on this before we did, changing his own line and veering sharply away from the second bird. He had avoided the trap—but now both Eagles were in pursuit. The drama played out in virtual silence, no sound emanating from the three actors save the frenetic whistling of the duck’s wings cutting the air as he made his bid to escape.

The three birds flew out over the pond toward a distant line of trees, the Canvasback still holding his lead—barely—as they slipped out of sight. The duck’s speed gave him the edge, but it was an open question whether it would hold out against the stamina of the much larger birds. We waited through the tension, and hoped.

The question is: why? In a contest like this, the prey is in immediate danger: if it’s caught, that’s the end. However, there’s risk to the predator as well: if it misses, it goes hungry; too many misses and it falls to starvation. Intellectually, we know this: If a predator doesn’t eat, it will eventually die. So why root for the prey?

Two words: connection and transference. Consider the Canvasback again: I’d been watching him languidly cruise the pond, apparently without care or concern. All was peace and tranquility—until the first Eagle dropped out of the sky. And just like that, in a fraction of time indivisible in its brevity, what had been a relaxed encounter shifted into a life-or-death drama. In that moment, the duck was transformed. From a life one step removed, he’d become an individual to whom I was now intimately connected, obeying the instinct that undergirds all of our journeys upon this Earth, bird and human alike: survival. And through that connection I could feel, for the briefest of spans, what I imagined he felt: the fear, the desperation, and the desire, above all else, to live. Emotionally, how could I not want him to escape?

Though it couldn’t have been more than a few minutes, for all of us gathered there the wait stretched into interminability. We began to fear the worst for the Canvasback, that he’d met his match and contributed his life force to the Eagles, his death ensuring, for a time, their continued survival. 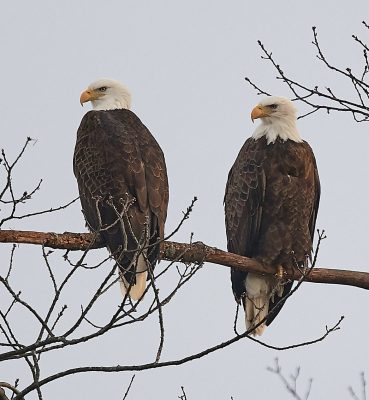 Then we caught motion over the distant trees—and there he was! The Canvasback flew towards us, high up and now well ahead of the two birds of prey. As the duck passed over our heads and away, the Eagles, at last, gave up, circling down to the trees and out of sight once more. For today, at least, the duck had triumphed. I congratulated him on his victory and wished him well. And I congratulated the Eagles on a valiant effort, comforting myself that they would find future meals among the pond’s waterfowl, as they had done on other days. On those days, I would be thankful for the lives that the birds sacrificed for the good of the Eagles, while also quietly mourning their passing. Such is the way of things. If you love Nature, you must love all of Her, and recognize that some days go to the prey and others to the predators—exactly as it should, it must, be. In such transactions, there is no good or bad, there simply is—an exchange of one life for another, neither one better or worse, but both equal.

In witnessing such encounters, we are reminded of the beauty and heartbreak of life, and of its sublime ephemerality. If we open ourselves to the full experience, put aside our egos, we might see ourselves as part of the life equation, like all who walk, swim, crawl, or fly upon this Earth—our home, yes, but not ours alone. We may recognize ourselves in the Canvasback’s desperate flight, or in the Eagle’s hunger. Looking deeper, we may learn to embrace life’s gorgeous transience and live, not in fear of the end, but in celebration of the now. If we let these threads entwine, we may awaken to the connectedness of all things, to the interdependence of each upon the other, and to the simultaneous inseparability and exquisite uniqueness of each individual existence. For at the source, we all, regardless of form, are lives full of vibrancy, potential, and promise. 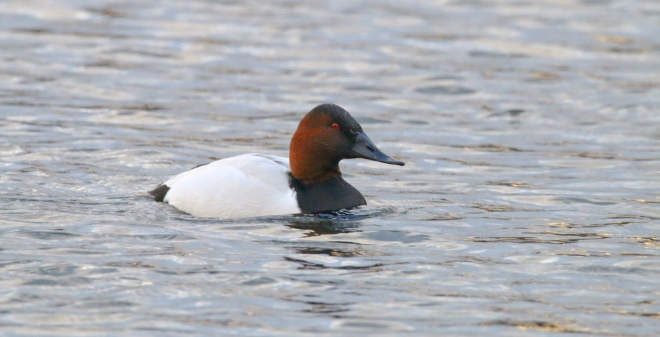 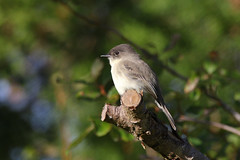 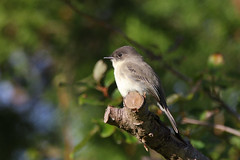 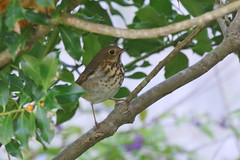