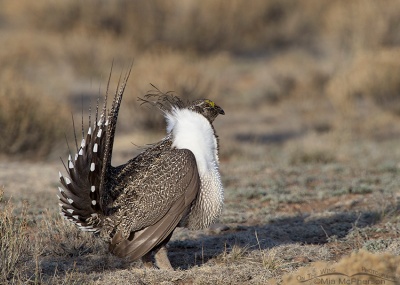 Male Greater Sage-Grouse on a lek in Utah. © Mia McPherson, On The Wing Photography

When thinking of dramatic, exciting birds—in North America, at least—most of us would probably turn to one of the raptors—the Bald Eagle, Peregrine Falcon, or Snowy Owl, perhaps—or the big wading birds like herons and egrets. Those familiar with the coast might picture a seabird or diver—maybe the Atlantic Puffin or Pacific Loon. And who could argue with a Painted Bunting, Scissor-tailed Flycatcher, or Green Jay? Though we lack the variety of Central and South America’s stunning tropical birds, there are still many that place high in the ranks of the flashy and magnetic. With such diversity to choose from, the Greater Sage-Grouse would be lucky to make the list: Decked in mottled gray-brown and virtually invisible nine months of the year, it’s exactly the opposite of dramatic. Understated and secretive (while not breeding, at least) and roughly the size of a chicken, this bird is hardly a firebrand to rally around. And yet the Greater Sage-Grouse is at the heart not just of this century’s greatest land preservation effort, but the largest single-species conservation endeavor in history.

The story unfolds in the Sagebrush Sea, a landscape stretching across 165 million acres—260,000 square miles—and 14 western states. Fragmented by development, energy production, and agriculture, it’s the last remnant of a vast sagebrush prairie that once ran unbroken from the Black Hills of South Dakota and Wyoming to the Pacific coast’s Cascade Range. A multitude of creatures seek out the sheltering confines of the Sagebrush Sea, depending on it for sustenance and survival. Alongside the Sage-Grouse are pronghorn antelope, Brewer’s and Sage Sparrows, pygmy rabbits, mule deer, sagebrush lizards, Long-billed Curlews, elk, Horned Larks, jackrabbits, Marbled Godwits, Sage Thrashers, and sagebrush voles. Red-tailed Hawks, Short-eared Owls, and Golden Eagles hunt for prey over the steppe. In all, more than 350 species—many found nowhere else—share the Sage-Grouse’s home.

Or what’s left of it. Two-hundred years of settlement, farming, ranching, mining, urban development, and fossil-fuel extraction left the Sagebrush Sea devastated, half of its once-great sprawl lost to humanity’s juggernaut. And Sage-Grouse numbers have plummeted: from the bird’s historical population of perhaps 16 million, a scant few hundred thousand remain—and they’re perched uncomfortably close to extinction. Without direct, aggressive, and rapid action, they could slip beyond hope of recovery.

Fearing the worst, the federal government stepped in: in 2010, the US Fish & Wildlife Service determined that the plight of the Sage-Grouse made it a prime candidate for protection under the Endangered Species Act—a move first proposed in 2006. However, it hasn’t yet listed the bird.

The Fish & Wildlife Service has until the end of this September to make the call—and there are a lot of people on both sides of the fence collectively holding their breath. On one hand, listing the Greater Sage-Grouse could cost five billion dollars in potential lost economic output across the 11 western states where the bird still roams. On the other, doing nothing will almost certainly drive the birds to extinction. Regardless of where people come down on the issue, the question on everyone’s mind is: can we strike a balance between the extremes? Can we keep the West open and still save the grouse?

It’s a question of considerable interest to the states that harbor the grouse, and they’re leading the way towards an answer. Earlier this month, Montana Governor Steve Bullock signed an agreement with the USDA that pledges cooperation between federal, state, and local governments in efforts to protect the birds; in May, Gov. John Hickenlooper of Colorado issued an executive order directing state agencies to take direct actions to conserve both the birds and the sagelands on which they depend; and the state of Wyoming established a Sage-Grouse conservation policy as far back as 2008, under then-governor Dave Freudenthal (since updated by Freudenthal’s successor, Governor Matt Mead). Other states are beginning to follow suit, and the federal Bureau of Land Management (BLM) has also recently updated its original conservation plan with a new plan that seems to more effectively balance the needs of grouse and people, protecting critical habitat while allowing for recreational, agricultural, and industrial activities vital to the western economy within less important or sensitive areas—a move applauded by several environmental groups as the best chance to save the birds, as it addresses many of the most serious threats to the grouse while not completely restricting human use of the land.

Efforts like these are creating alliances among groups with typically divergent interests: elected officials, ranchers, environmentalists, and representatives from local, state, and federal agencies; fossil fuel and mining companies; and conservation organizations like National Audubon. This multi-disciplinary approach seems to be the most effective way to ensure the broadest possible support for the plan, resulting ideally in the greatest measure of protection for the birds.

Perhaps the best example is the Sage Grouse Initiative (SGI). Launched in 2010 by the USDA Natural Resources Conservation Service (NRCS), the SGI unities ranchers, agencies, universities, non-profit groups, and businesses in a partnership with a singular vision: wildlife conservation through sustainable ranching. Employing the power of the Farm Bill, the NRCS works to fund and certify voluntary conservation projects across all 11 Sage-Grouse states. To date, more than 1,100 ranches have signed on, and together they’ve restored and protected 4.4 million acres of prime sagebrush habitat vital to the survival of the birds.

It’s a partnership that benefits more than just the grouse. Sage-Grouse are a classic umbrella species: by protecting the land they depend on, you also protect everything else that relies on the sagebrush for survival—all 350 species that fall under the Sage-Grouse’s umbrella. The bird, the land, and the abundance of wildlife within are linked intimately in a precarious dance along the edge of survival. And far from mere observers, we too are partners in the dance: The ranchers whose livelihoods depend on the sagebrush landscape are also at risk, as are we who partake of the fruits of their labor. Protecting and improving land for the grouse provides better, more nutritious forage and enhances the health and happiness of the animals pastured on it—both safeguarding the vitality and stability of a critical resource and fulfilling a moral obligation to care for the animals we use.

It is perhaps this last thought that resonates the loudest. Why is it important to save the Sage-Grouse? Because we can, and are thus morally bound to do so. Because it, like all other species, has the right to exist, and we do not have the right to deny it that. And because honoring and preserving the grouse would show the true measure of our character, our humanity, and our commitment to value more than just human life. The Sage-Grouse is a part of the great biologic system of this planet, to which all other species—ourselves included—belong. If we lose the grouse, we lose a part of ourselves as well: as goes the bird, so go us.

Ultimately, preserving the Sagebrush Sea is about more than the grouse. It’s about saving an entire interconnected ecosystem of which we are also a part. And it’s about shifting our place on this Earth and our role here—from lords and consumers to stewards and conservers, from devouring to renewing, and from bringers of death to guardians of life.

The Cornell Lab of Ornithology has done a wonderful job documenting the plight of the Sage-Grouse, and you can read about it here.

You can read about the Bureau of Land Management’s Sage-Grouse plan here.

Mia McPherson was kind enough to donate her beautiful images of the Sage-Grouse. You can view more of her work here.