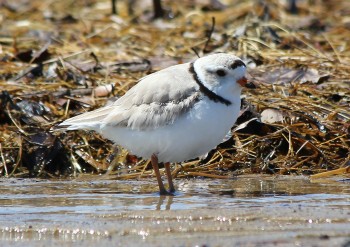 Just over a year ago, Lawrence Harmon penned an opinion piece for the Boston Globe lamenting the closure of sections of two North Shore beaches during Piping Plover nesting season (I wrote about it in an earlier post, Beaches Are For The Birds). In his view, the plovers had rebounded enough and it was time for people to get their beaches back. A substantial amount of money had been spent restoring those beaches, and it wasn’t fair that people didn’t have unrestricted access to them.

Now, Mr. Harmon is entitled to his opinion, and I would never advocate the restriction of free speech, but he was, quite simply, wrong—as most readers took pains to point out. Of course, not all were against him, but those in support were as misguided as he. The problem stems from two things: a lack of understanding of what the plovers need to survive, and the failure to appreciate that the predicament they’re in is our doing.

It would be nice if Mr. Harmon’s piece were the end of it—if, duly chastised, he and those who shared his position realized their collective error, and all subsequent voices in the matter were raised in support of the birds. It would be wonderful if those of us who care about the plover’s future no longer had to expend energy educating others to do the same.

Sadly, that’s not the case. Piping Plovers are in the crosshairs again, at the center of a decades-long war on North Carolina’s Cape Hatteras National Seashore between environmental organizations and a small group of off-road vehicle (ORV) enthusiasts. After a precipitous decline in Piping Plover nests in the late 1990s to early 2000s—and a subsequent lawsuit by environmental groups of the National Park Service (which had been ignoring an executive order issued by President Nixon to regulate ORV traffic and protect the seashore)—in 2008, the NPS finally issued sound, sensible regulations and restrictions on ORV use during the short shorebird nesting season—much to the dismay of the rabid ORV lobby, who decries any infringement of their recreational pursuits. And though they’re quick to point out that ORVs are not entirely responsible for the decline of the seashore’s birds (which is true, though they bear the lion’s share of the guilt), the regulations have worked: by 2011, nests of Piping Plovers nearly tripled—and other shorebirds benefitted as well, including Black Skimmers, Least, Gull-billed and Common Terns, and American Oystercatchers. And it’s not just birds that began to thrive: in 2012, sea turtle nests broke all previous records, and pedestrians—safe from ORV traffic (and who outnumber the ORV drivers almost 100-fold)—started returning to the beaches, helping the local economy boom. It’s now a situation where everyone benefits: shorebirds and turtles can nest and rear young safely, pedestrians can walk the beaches, and ORV drivers can still use the seashore for most of the year. Everyone’s happy.

Or so you’d think. But the ORV lobby is at it again. This small, very vocal minority is on the attack, and they’ll accept nothing less than total victory: complete and unrestricted access to the seashore year-round, and to hell with the birds—or anyone else, for that matter. They’re loud, they’re bullies, and as far as they’re concerned, the seashore belongs to them. It’s a classic case of human entitlement, and it does not do us proud.

Unfortunately, Piping Plovers aren’t the only ones at risk. Shorebird populations all across the continental United States are plummeting: since 1974, North America’s lost upwards of 50 percent of these long-distance migrants—an astounding 12 million birds, nearly half again the human population of New York City. So severe is the decline that more than half of the continent’s shorebirds made the North American Bird Conservation Initiative’s 2014 State of the Birds Watch List—a dubious honor, as inclusion indicates a need for immediate protection. This year, one of these birds—the strikingly beautiful Red Knot—achieved another questionable accolade: it now appears as threatened under the federal Endangered Species Act, joining four other shorebirds on a list that will over the foreseeable future only get longer. Again, this does not do us proud.

So what can we do about this? Sadly, I don’t have the answers. I do know this, though: we need to start by asking better questions. How can we balance the needs of human and non-human life? As the dominant species on Earth, isn’t it our responsibility to care for this planet and all who share it? Would a world devoid of all but the human be worth living in? How can we vouchsafe our survival and ensure that future generations inherit a world rich with the full diversity of life, and not one barren as the Moon? How can we, as a people, stem the tide of destruction and loss, and what can each of us, as individuals, do to help? And how do we want to be remembered—as the species that brought ruin to our world, or the species that saved it for all?

As always, the choice is ours.

What will you choose?

If you’re interested in learning more about the shorebird situation, you can read Deborah Cramer’s New York Times editorial here.

Ms. Cramer’s also done a remarkable job chronicling the plight of the Red Knot in her book The Narrow Edge: A Tiny Bird, an Ancient Crab, and an Epic Journey.

If you want to get involved in helping Piping Plovers on the Cape Hatteras National Seashore, you can support the National Audubon Society’s conservation effort here…

… and submit a public comment to the National Park Service directly through its website here, or through the Defenders of Wildlife’s site here.

Shawn Carey and Migration Productions have produced a wonderful DVD called Epic Journeys, about the migration of Semipalmated Sandpipers, Piping Plovers, and Red Knots. You can get more info about it here.

… and this one here.

And if you want to learn about the U.S. Shorebird Conservation Partnership, you can check out their website here…

2 thoughts on “Beaches Are (Still) For The Birds” 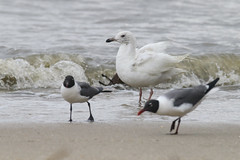 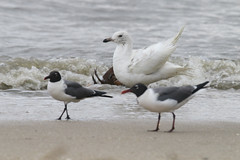 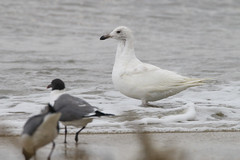